Modeled after the pioneering French immersion programs developed in Canada in the 1960s, the LUSD foreign language immersion programs are designed to enrich the education of native-English-speaking students by teaching them all of their academic subjects in a second language. The goal is for students to become proficient in the second language and develop increased cultural awareness while reaching a high level of academic achievement. Students develop proficiency in the second language by hearing and using it to learn all of their school subjects rather than by studying the language itself.

Full Immersion – Programs in which all or almost all subjects taught in the lower grades (K-2) are taught in the foreign language; instruction in English usually increases in the upper grades (3-6) to 20%-50%, depending on the program.

In grades 6-8, students will continue their immersion journey by taking two courses in the target language: Literature and History-Social Science Course. Students also have the opportunity to continue with the 3rd language option before or after school classes.

Why is it better for my child to learn a language in elementary school?

Studies have shown, and experience has supported, that children who learn a language before the onset of adolescence are more likely to have native-like pronunciation. A number of experts attribute this proficiency to physiological change that occurs in the maturing brain as a child enters puberty. Of course, as with any subject, the more years a child can devote to learning a language, the more competent he or she will become. Regardless, introducing children to alternative ways of expressing themselves and to different cultures generally broadens their outlook and gives them the opportunity to communicate with many more people.

Is immersion education the right choice?

One of the first questions often asked by parents is, “Is this the right choice for my child?” When trying to answer this question it is important to remember the opportunities you are offering your child by exposing him or her to other languages and cultures. Through the immersion model, your child will become biliterate and will be able to communicate freely with persons who speak the target language — which in our case is Spanish. Being biliterate will enhance your child’s opportunities in the job market and will also make it easier to learn a third language. This is a long-term commitment, so be ready to commit the time it will take for your child to succeed in this program. For children to become fully biliterate, you need to make a commitment of kindergarten to fifth grade, for language to be fully acquired and formed, children need to continue in this type of program into middle school and even high school.

Does it matter if no one at home speaks Spanish?

The program was designed for children of families who do not speak the target language (Spanish), and also for families whose native language is not English. For families who don’t speak Spanish at home, additional effort to bring that language and culture into their homes will help students acquire the language faster. Support is available from a number of sources including after school programs and DVD programs.

Is any English used in the Spanish classroom?

Parents often ask if the teacher slips in a word or sentence in English in the immersion classroom. On rare occasions, if a child needs to be comforted, this can be done in English by taking the child aside and speaking softly to him or her. It is extremely important that only the target language is used in the immersion classroom. Speaking English may help comprehension at a particular moment, but in the long run, it becomes a hindrance to learning the target language because the child may constantly feel a need to have a translation of everything said. If English is used in the classroom, the child will wait for the English and will not focus on the target language instructions being given by the teacher.

Are students in the program screened?

For children entering kindergarten, there is a screening for beginning school readiness and English fluency. In order to enter first grade, children must have exposure to Spanish phonics. Beyond first grade, entrance is on a case-by-case basis with the parent agreeing to a trial period.  An extended period of unsuccessful learning will be detrimental for the child.  The only children not suited for immersion are those who have difficulty with auditory discrimination or auditory memory. Children who may have difficulty learning to read in English may have difficulty learning to read in the target language.

What will happen to children’s skills in English?

From kindergarten through fifth grade, parents will notice that the acquisition of language is not consistent in both languages at the same time. One language may lag as the other moves forward. This will then switch and the language that was lagging will progress and the other language will lag. By the end of the elementary grades, immersion students perform the same or better than students in the regular program on standardized tests of measured English skills. Because these students live in an English world if their parents continue to work on English literacy skills the learning in Spanish transfers quite easily.

How does this type of program affect test scores?

What about the first days of an immersion model?

For students beginning school in early immersion programs, the only difference between the immersion class and the English-only class is that the teacher is constantly using the second language unless there is an emergency. The children are made to feel secure right from the start and, after a few days, they do not focus on the fact that the teacher is not speaking English. 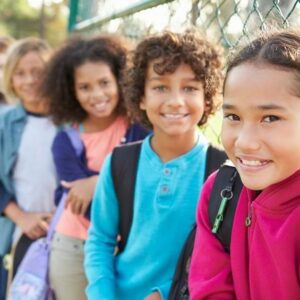 Install this Lakeside Union on your iPhone

and then Add to Home Screen